Last spring, I posted about how Hubby and the kids and I shop at the local Asian markets and wind up daring each other to try things.  Over the years, we've become steadily more adventurous.

After last week, though, I'm not sure we have anyplace else to go. (Without getting into scary animals and parts of animals that I don't think are meant to be eaten. I drew that line even before my boys found frog legs at a buffet and tried to convince me that they were good.)

Hubby called and told me to bring home an interesting fruit we hadn't tried before. So, after consulting with my three boys, I did. 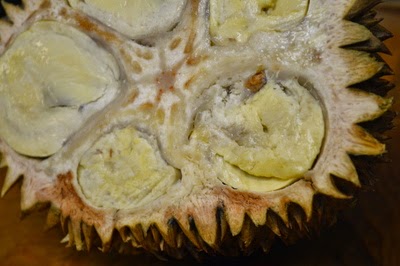 If you're not familiar with Durian, it's got a nasty reputation for its smell and flavor. The nice young man in the produce department told us that it wasn't nearly as bad as the Food Channel had led us to believe, that it tasted "like banana pudding and garlic powder had a baby."

And no, I can't tell you why bringing one home to try sounded like a good idea. Probably because I knew it was going to happen sooner or later and wanted to get it over with. One of my sons, the one who should definitely be old enough to know not to poke the sharp fruit, was bleeding by the time we got to the checkout line.

It was two days before we worked up the nerve to cut the thing open.

I took my bite before anyone else had a chance to make a face or tell me how awful it was. I think the banana pudding and garlic description came pretty close. Hubby says that it smells and tastes like natural gas. There's a definite touch of sulfur. And the taste lingers in your mouth for a very long time.
Posted by Michelle at 4:00 AM

Oh yuk, it looks rotten. I admire your families adventuresome spirit. So many kids these days won't even eat the "normal" fruits and veggies. You really should give fried frog legs a try. I curled up my nose when my husband ordered them at a Greek Restaurant, but they were so good I took my son a few weeks later so he could try them. The hardest part was getting past the look of the legs. My husband said it's no different than eating a chicken leg, just smaller. He was right!

I'm pretty adventurous when it comes to eating (I'll eat animal parts that most people think should not be eaten) but based on your description, I'd have to say that I'm not sure I'd want to give that a try. ;-)

I lived in China a few years ago and in some elevators there were " no Durian" signs posted. I had to ask why and when I discovered it was because of the horrible smell I decided it was one food I would not be trying! Good for you for being brave and giving it a go.

Better you than me! Despite growing prolifically here I don't want to even try it.

One of my Malaysian friends told me that people either love durian, or get sick from the mere mention of it.
I'm in the second group, myself.

Thanks for the report. I don't have to experience that for myself. I have tried the frog legs, only once. My aunt and uncle came to visit me while I was away to college, and took me out to a fancy restaurant. I tried them. They tasted quite fishy and ate like chicken. I didn't need to try them a second time. Maybe at another restaurant they would taste better.
Other cultures grew up on different things. I like diversity. Let them be who they are, and enjoy the difference.
Hugs

I have never heard of this fruit before. Are there other ways it can be prepared that maybe it would taste better? I like banana pudding and I love garlic, but not together.

Thanks for the warning. I won't be buying any even though my son and I love to try things we haven't had before.