{Yarn Along} still avoiding my heels

My plan was to finish the second heel on the Croc Socks so that I could talk about that this week, but I spent my heel knitting time piecing a new baby quilt top, and I don't regret that one bit. That heel will still be here whenever I get around to it.

I did spend a few hours working on the ribbing of the second Green Envy sock. You can't see much of a difference, especially since this is a repeat of last week's picture. 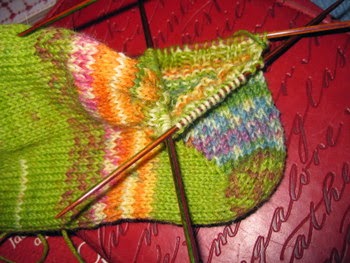 I'm doing my Yarn Along post for this week a day early because tomorrow I have a guest post by Connie Archer, author of A Roux of Revenge. There's a giveaway, too!

A Roux of Revenge

is the third book in the Soup Lover's mystery series. I haven't read the first two, but it was easy to jump in with this one. While I could tell that there's a lot of backstory with the characters, and it wasn't all spelled out in the book, I wasn't too lost to enjoy the mystery.

Here's the book's description from Amazon --

Snowflake, Vermont, is known for its skiing in winter—and its soup all year round, thanks to Lucky Jamieson’s By the Spoonful. Autumn brings golden leaves, pumpkin rice soup, the annual Harvest Festival…and murder.

Lucky’s soup shop is busier than usual this October, with groups of itinerant travelers in town to work the Harvest Festival. One newcomer seems to take a particular interest in Lucky’s young waitress, Janie, spying on her from across the street. Is the stranger stalking Janie?

After an unidentified man is found murdered in a van by the side of the road, simmering suspicions about the travelers are brought to a boil. But when Janie is put in harm’s way, Lucky must join forces with the travelers to turn up the heat on a killer…

The atmosphere is wonderful and the soups, even the beet one, sound so good I want to try the included recipes.  There's a full cast of characters and a satisfying, suspenseful mystery. I definitely plan on reading the earlier books in the series.


For more pretty knitting projects to drool over, check out On the Needles at Patchwork Times and Work in Progress Wednesdays at Tami's Amis. And be sure to come back tomorrow to enter the giveaway!

Disclosure -- The publishers provided me with an electronic ARC.
Posted by Michelle at 4:00 AM

Beautiful work! May I ask what the yarn is and the colorway? I love the way it's knitting up. :)

Love your socks and the bright green in the colorway, so cheerful!

sounds like an interesting book. I'll look for the series!

I'll have to add that book to the list. I love that sock! The yarn colors are just perfect.

i love that sock yarn. those are going to be stunning socks