I tried piecing with the Featherweight last night. It didn't go entirely well. My tension went from fine to completely off and then back to decent, seemingly at random. And some someone at some point had put a bobbin in with its stuff that looks almost exactly like a featherweight bobbin but definitely isn't. Took me a while to figure out that that was part of my problem and then I couldn't manage to wind a new bobbin and the book is out in the sewing room...

Edith Mae is too small to sit nicely on my sewing machine table, and her cord isn't long enough to stretch over to the kitchen table, and I don't know enough about her quirks to help her do what she should. But I don't have the urge to scream obscenities at her because she's sixty two years old and deserving of some TLC and nice treatment.

Before throwing in the towel for the night, I finished the last few seams on this little top (which wound up being a smaller version of this tutorial) -- 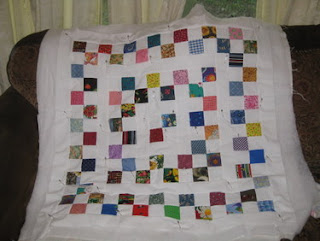 And I pieced this, which I've been thinking about all week. I thought I knew how to do what I wanted without measuring and cutting extra triangles, but wasn't sure the seam allowances would work for me to do a quick corner triangle with only three squares in the pieced part. It worked just fine and I'm going to add some borders as soon as I get my hands on a machine that will let me do it. 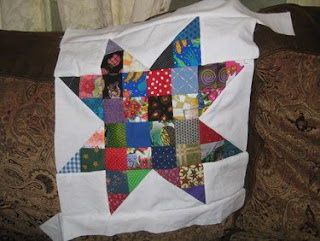