it's been ten days

When I decided to take drastic measures and set difficult goals for myself, I should've known that the sewing machine wasn't going to hold out. But even though my machine didn't make it to the end of my personal challenge, I'm happy with my results.

Yesterday, the last day I had to work on it, I got Alex's Janome working and added the borders to my scrappy sawtooth star -- 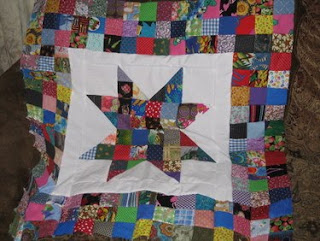 And then, because I was soooo close to what I could manage of my goal, and I'd had scrappy Bento Box sort of blocks dancing around in my head all week, I pieced this little top. Which no longer looks anything like the Bento Box I had in my head, because I got derailed by the possibilities. I'll make the other one later. 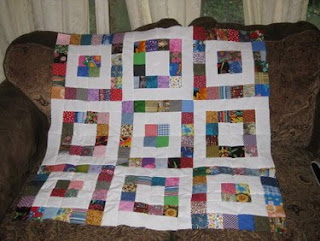 Halfway through, I lost my momentum and decided that I was wasting fabric, but I like it better by the light of day. And I always like them better once they're quilted.

That brings my total to six finished quilts and four new tops in ten days. Not quite the ten finishes in ten days I was aiming for, but more than I expected after I lost my good machine on day four and then lost a couple of days sulking about it.

And my real goal was to get back into the quilting habit after two months of not being able to. I've done that!

This is the one with the spirals that was left half quilted and gathering dust in my machine for so long after the accident. Between my sore shoulders and the machine's tantrums, the quilting is sort of a train wreck, but done is better than perfect - or something like that. 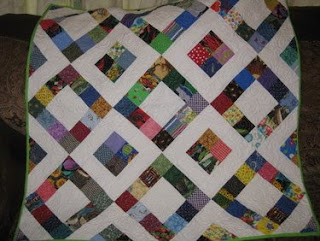 When I first started working on the Scrap Savers System from Quiltville, I cut a bunch of novelty prints into six inch squares for I Spy quilts. There was a plan, I just can't remember exactly what it was, and then the squares got lost in a safe place.

Whatever I originally intended, I like the way this came out and have enough squares left for a couple more little I Spies. 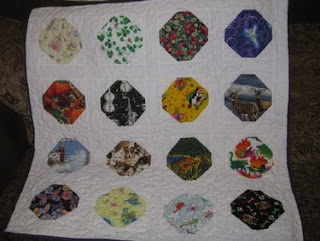 So when I found yards and yards of this blue floral in an estate sale box, I decided it was time to give it a try. It really needs a design wall to lay it out right, but other than that, it's an easy project. 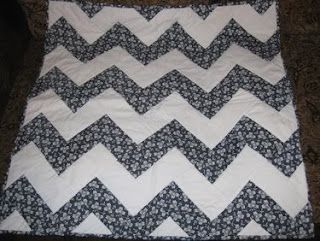 And this one was a pattern from Quiltville that just needed binding. 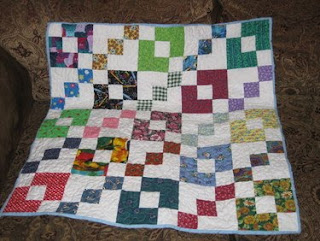 The other quilts and tops I've finished over the past ten days are here and here.
Posted by Michelle at 8:50 AM

I think, all things considered, that you did an amazing job on your challenge. I like the saw tooth and the bento-like the most, but they're all pretty.

Fabulous, fabulous quilts!!! Each one unique, bright and energetic... hooray for you!

WOW!! What fun happy quilts and you got so accomplished even if it isn't as much as you wanted. Amazing!!

Hi Michelle, I am full of awe and wonder at your beautiful quilts, I love them .... especially how the colours stand out against the white .... almost jewel like. Absolutely gorgeous :0)
Have a lovely day!
Val xx Oxfordshire UK

I think you've achieved amazing amounts for someone who was fully fit and had her best machine functioning ... so to see what you did whilst still recovering from the accident and a variety of other machines is INCREDIBLE!!
All the quilts are great, but particularly like the Caroline Chain one :)

Wow, they are all beautiful! And done in 10 days! Did you ever take a brake?!

This is encouraging to all of us! I love the bentos set on point. Good comeback!