I've been collecting fabric for a chicken quilt for at least four years now, picking up red florals that looked like good chicken feathers. And some blacks. The stack of fabric keeps growing and my pattern choice keeps changing and now and then I'll pull it all together and think about starting.

The magazine with my latest pattern choice has been lost and found more times than I can count. When I decided to start cutting fabric last week, there was no sign of it.

I'd originally found the pattern at the library, but I didn't know what issue of the magazine it was in, just that it had an ugly blue and black log cabin on the cover. Luckily the librarian working at the periodicals counter was a quilter herself and didn't have any problem with my request to look at the covers of all of their copies of American Patchwork and Quilting.

By the time we found the right one, I think her fingers were crossed tighter than mine!

Now I can start cutting fabric for chicken blocks. 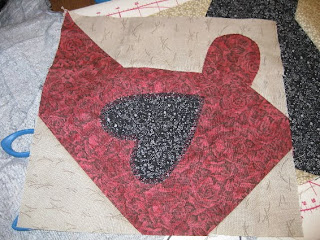