I see a noose, but I'm not sure if that means my kids have a morbid streak or that their Mommy does.

It's been an unproductive afternoon. Well, I did read to my kids and help them with math and give them spelling tests and everything else that was on the schedule. And I ran a load of laundry and did a bunch of dishes, but I missed out on my afternoon quilting time. I need to make up for that when I'm done here.

While I was trying to convince the littlest ones to fall asleep in my lap, I fell in love with an elephant quilt. I've seen the block (Ararat from the Kansas City Star) quite a few times, but I've never seen a bunch of them put together into a quilt. I can't even find a picture of an elephant quilt online, so I had to take a picture of my television screen so I won't forget how wonderful it was. 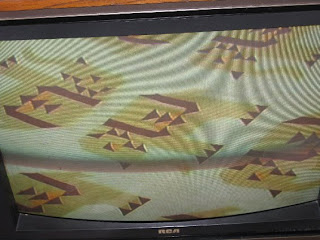 Now that its safely arrived at its new home, I can show off my second knitting finish of 2009, a wee tiny sock for the wee tiny sock swap. 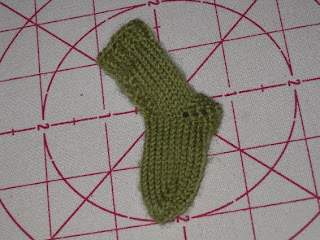 I knew I was knitting 20 stitches on size 0 dpns (first time I've used those!), but it still shocked me how tiny my tiny sock turned out. I did mine toe up, with a short row heel that's garter stitch partly because I've been thinking of trying one of those on a big sock and partly because I didn't want to fiddle with turning and purling back across those few itty bitty stitches. And there's a bit of lace up the front that doesn't show up in the picture.

I want to knit some more of them with cables and fancier lace, just because I can. I've gotta do something with my yarn and needles, right?

I found the pattern for the Cheery Buzz Saw quilt, which isn't on the magazine's website anymore and which I was thoroughly annoyed at myself for not taking better care of and I think I've decided to use my Country Essentials Breeze sampler. I'll save the Mama's Cottons for something else. Now the question is whether or not I've got enough good muslin left.
Posted by Michelle at 6:23 PM

The heel is so cute! Maybe the way to get over my Toe Up Fear is to try a wee tiny that way...

Very cute wee tiny sock there! I hope that mine arrived to you safe and sound...