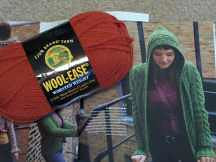 I picked up my Central Park Hoodie yarn yesterday and it's absolutely exactly the color I've been wishing Lion Brand would come out with. I would've started swatching last night, but I'm happily distracted by this -- 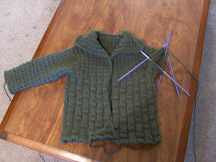 If I don't get that second sleeve done soon, I have a feeling it's going to sit unfinished until Quinn is on the verge of outgrowing it. I'd hate for that to happen because it's been a fun project and I'm really proud of the textured stitches and the way they work together and the whole increasing-in-pattern-so-it-looks-decent thing. As far as I can tell with part of it still on the needles, it fits with just enough extra room. The body and first sleeve didn't take anywhere near as long as I expected them to.

But if I don't get started on Central Park, I'm going to get distracted by something else. Like the itty bitty Christmas stockings I saw suggested on one of the lists, or the Cable Embrace scarf or a cascading leaf throw...

I don't like the yarn the pattern calls for. There's no way I'd ever manage 48 identical squares of something that complex -- but wow it's pretty. Wonder how many squares a baby blanket would take?
Posted by Michelle at 11:05 AM