I would love to sit down and have a discussion with the heroine of the Sketch in Crime mystery series. I just don't understand how her freegan mind works...but I love reading about CeCe and her friends. In the third book of the series, The Drawing Game, she's investigating a murder in the newly built neighborhood next to her mother's property. The houses are solar powered and eco-friendly, but things at Green Acres aren't as perfect as the developer advertises them to be. I wish the author had gone more into the issues of freegan parenting that she raised. I know that babies don't need nearly as much physical stuff as most parents buy, but I have lots of unanswered questions. This is a fun series that makes me wonder about the characters and their lifestyles almost as much as I wonder about the mystery itself.

Today I'm lucky to have the author sharing some more information about her characters. For a list of the other stops on her blog tour, visit Great Escapes Virtual Book Tours.  And make sure to enter their giveaway -- the Rafflecoptor widget is at the bottom of this post! 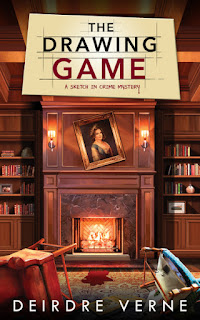 Is there anything worse than having your ex-boyfriend accused of murder while your current boyfriend is the town’s detective? CeCe Prentice, artist and environmentalist, is thrown for a loop when her still hot and deliciously charming ex-boyfriend, Charlie Knudsen, becomes the main suspect in the murder of a leading Green-living expert.

Ah, the love triangle. There’s nothing I adore more than keeping the tension going through an entire series. I often get asked about the men in my books so I’m going to come clean about Charlie Knudsen, CeCe’s ex-boyfriend. Twenty years ago, I was visiting a friend and her brother-in-law stopped by. I nearly fell off my chair, the brother-in-law was that good-looking. Charlie (his real name), I later discovered had modeled as the Marlboro man. Anyway, I vowed to put that name to good use, hence CeCe’s ex-boyfriend, Charlie Knudsen.

It has taken me two full books to get Charlie Knudsen and Frank DeRosa, the men in CeCe’s life, on speaking terms. I waited until the third book to pit them against each other because frankly, I’ve been wondering who CeCe really likes. So, with one behind bars and the other combing the town for clues to keep him there, I’ve put poor CeCe in an awkward position.

I’ve had a lot of fun forcing CeCe’s emotions to flip-flop between the two men and I hope you enjoy the tension too! 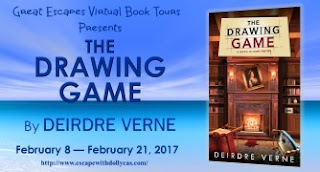 "The Drawing Game" sounds like an interesting read. This is a new series and author to me and I would really enjoy reading the books.

This does sound interesting. I'm going to investigate others, too. Thanks for posting this.