I finish a pair of socks, I reach for the next skein of sock yarn and cast on for the toe. I'm not even procrastinating anymore when it's time to turn a heel. That's because plain socks are easy and I can work on them without much focus, and pick them up and put them down again without keeping track of where I left off. These days, I can even stop mid-heel without much trouble. 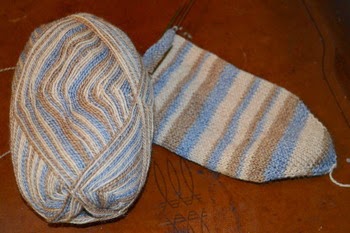 This time it's some Regia Cotton Surf that I ordered from Elann for my birthday back in 2006. No, my memory isn't that good. I knew it came from Elann and that I had three skeins of different colors, but not the date or occasion. A peek at my purchase history filled in the missing details. Everything but the color name. The ball  band just has numbers and since the yarn is discontinued I'm having no luck finding the name that goes with it. It's either Bahama or Silt or Sand.

It's been in that "too nice to cast on with" pile. In hindsight, I'm not sure why. There's not much I'd want to do with it but let the yarn do its own thing. I'm loving the color and the texture, but I'm not so sure about the stripes. It's so much prettier in the skein!

When I cast on and saw what it was doing, I thought this was going to be a repeat of the red white and black socks from a few weeks back. I like these uneven much stripes better than the predictable ones I got on that pair.

I've got a new favorite mystery series, the Tarot mysteries by Steve Hockensmith with Lisa Falco. Our family spends a lot of time in Sedona, Arizona, and I've always been intrigued by the vortexes and the crystal and shops with signs that promise healing crystals and tarot readings, but we've never ventured into one. (It just doesn't feel like the place for discreet browsing with four kids in tow.) As soon as I saw The White Magic Five & Dime, I knew I wanted to read it.

Alanis McLachlan is surprised when a caller informs her that her mother is dead and that she left her The White Magic Five & Dime, a new-age shop in Arizona.  Alanis hasn't spoken to her mother in twenty years and it's news to her that her mother's latest cons were as a tarot reader. In an attempt to find her mother's killer, Alanis re-opens the shop and starts doing bogus readings herself, hoping that one of her mother's victims will let something slip. She doesn't know a thing about the cards, but she does know people and how to read them. There's no shortage of clients with grudges against the deceased.

Alanis is darker than any cozy heroine I've read so far. Raised by a con-woman, she knows all of the tricks of the trade. But she seems like a decent person, even if she might not realize that yet herself. As soon as I started reading, I was hooked. The authors reveal a lot of back story in just a few well-chosen thoughts. It's not until halfway through the book that we begin to get lengthy glimpses of Alanis's childhood and her relationship with her mother.

Disclosure -- The publisher provided me with an advance ARC.
Posted by Michelle at 4:00 AM

Your new sock looks so soft and cuddly. I like to knit plain vanilla socks, too. It's relaxing to just knit and not have to pay a lot of attention to a pattern or stitches.