Only a few more rows before it's time to find out if that stretchy bind-off that I learned for the Rose Ribbons Shawl can translate to ribbing. I'm hoping that it'll work and I won't have to keep a larger dpn with my sock knitting projects anymore. 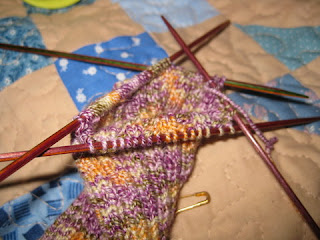 I'm dying to get back to my new lace shawl, 198 Yards of Heaven, but knitting time without distractions has been impossible to come by this week. I've been lucky to get an inch of sock done. Not that I'm complaining too much!

I love zombie fiction, so I was happy to get an advance reading copy of Contaminated

by Em Garner. The book opens as Velvet Ellis is searching the kennels for her mother. Tainted batches of Slim Pro,  a trendy protein water have turned most of the population into "connies." Not the zombies we're used to reading about and seeing in the movies, these are living men and women who have lost all impulse control.  The first wave of the contaminated was destroyed. Then, as researchers began to understand what was going on, they began to fit the shambling victims with shock collars that will subdue them.  They're being released from the kennels back to family members who are willing to take custody of them.

Velvet's father was killed in the first wave of the outbreak. She's struggling to attend school while also working and caring for her ten-year-old sister. Velvet and Opal are on their own. Most of their belongings were left behind when the military evacuated them from their old neighborhood. The government has lowered the age of adulthood and provides the con-orphans with support checks, but the two sisters are struggling just to survive.

Contaminated is being marketed as a young adult novel, but it doesn't read like one. It's chilling, a realistic glimpse of what a zombie plague might look like and how it could happen. There's not a lot of gore, but it's emotionally wrenching.  I highly recommend this one!
Disclosure -- the book was provided by the publisher.  For more pretty knitting projects to drool over, check out On the Needles at Patchwork Times and Work in Progress Wednesdays at Tami's Amis. I'm posting Yarn Along early this week because tomorrow I'm part of the blog hop for A White Room by Stephanie Carroll.

This book sounds so interesting I'll have to pick it up. So much of so called YAL fiction these days is better than most adult fiction I see offered.
On a different level - I read all the Gillian Flynn books last year and was amazed by her fearlessness. Wow, she just blew me away even though her subjects and characters are so dark. Have you read any of Minette Walters books, older but so well written and darker in theme?

Good luck with your bind-off! I have used Elizabeth Zimmerman's sewn bind-off for toe-up socks a couple of times now and am really happy with it.

I always smile when I see what you are reading..it's typically not what I read at all...My kids would love it though and I pass the reviews onto them.

Minding My Own Stitches said...

For toe-up socks I use a modified version of Jeny's Surprisingly Stretchy bind-off. I find her bind-off too stretchy :) Instead I process every OTHER stitch as she describes.

sounds like an interesting book. love the yarn you are using, great colors.

how did the BO work? The only problem with toe-up socks is a too-tight BO at the cuff. I've done a yo between bo stitches and this works but can also be a tad sloppy.

the color is glorious!

Pretty socks in those lovely colours.
I use a crochet bind off on my toe up socks it provides just the right amount of stretch and is easy to keep the ribbing correct.

lovely yarn! I wonder if I have the same yarn in my basket