I was back in the sewing room after dinner last night, sorting and cleaning until it got too dark to see what I was touching. I'm far from done, but I can't believe how much better it's looking. And how much better it feels!

One of today's projects was the bookshelf under the window. It's part of that awful built-in table and isn't quite the right size for quilting or knitting books. Not long after we moved in Grandma gave me a set of needlework encyclopedias and that's where I put them. I think I forget that just because something's been in the same spot for years, it doesn't have to stay there forever.

I boxed up the set of books and now my favorite quilting and knitting books, the ones that have been piled beside my sewing machine because I don't want anything to happen to them, are safely on the shelf. 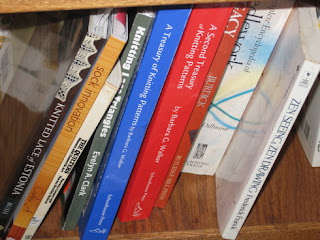 I've cleared off the entire surface of that L-shaped table, which is really shaped more like an "f", with the shortest piece lower than the rest. I could understand if it was one flat surface that went back to the corner, but this set up baffles me. I'm sure it was thought up by the same guy who thought beer cans made great roof flashing. 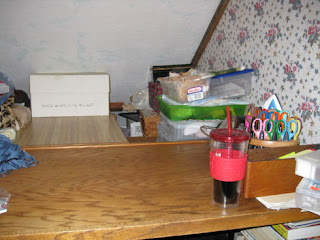 Like the flattened beer cans, it's not going to be a permanent part of the house. I don't know when I'll manage to get rid of it, but it's definitely going.

The lamp, which was here when we moved in, is boxed up and bound for Goodwill. It took up space, needed to be rewired, and I've finally decided to let it go. Should've handed it over to Grandma when she said she could sell it in the antique mall, but just because I missed that opportunity doesn't mean I should keep it, not when I've got other lamps that I actually like.
Posted by Michelle at 6:07 AM

GOOD FOR YOU!!! You'll enjoy your space much more when you make it your own. Beer cans for roof flashing, lolol....