the bugs are fighting again 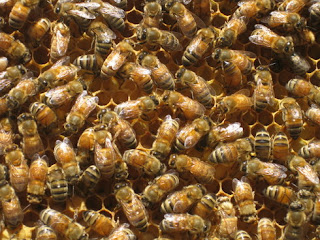 Remember last year's drama in the hive? Well, it's happening again. This time two of the new hives -- including the one I have a grudge against because they made my face swell up like I was wearing alien makeup -- are robbing the third of the new hives.

Hubby went to the hive that was being robbed and sprinkled flour onto the bees leaving the hive while he had me, wearing my new bee suit, crouch down near the entrances of the other hives and watched to see if anyone was coming back with flour on her butt. It works kind of like those dye-packs the banks use...

So now we know who's robbing who, but that doesn't mean we can stop them. All they're stealing is sugar water, and all of the hives have feeders full of the stuff. I swear, they're like little kids. 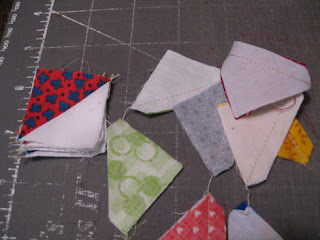 I'm using my Go! cutter and one of my newer dies to cut scraps into itty bitty triangles, because I've got an idea that's going to take a lot of them. These are the 1" finished half square triangles. I love this die, and see a whole ton of little doll-type quilts in my immediate future.

Silly bees! Why can't they all just get along?! :)

This happened to us last year, but it was the neighbor's bees robbing ours so we put sugar water in with ours and closed the hive up for a couple of days, then opened it just enough for 2 or 3 bees to pass so they could fight off the robbers.

I never knew bees were little thieves! It reminds me of The Frozen Planet and the penguins stealing each other's rocks for their nests.