Someday, I would love to tackle the applique patterns at Bee in my Bonnet. I just need to learn to do better applique and save my pennies. And make up my mind which of her patterns I love the most. I thought I had the decision down to either Grandma's Kitchen or Woman's Work, but now she's got a new one, Paper Dolls, that I might love just as much -- 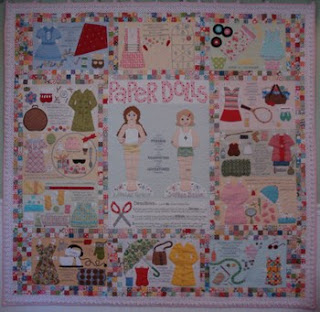 Aren't all of those little details fantastic? The mixer...and the suitcase...and the marshmallow roasting stick...and the umbrella...

To celebrate the release of the pattern, she's having a giveaway. Which I've entered, because I really would love to have one of those patterns, even if it's just to look at and dream about until I'm ready to actually tackle it.

More realistically (slightly), I'd like to find some small pumpkins and paint houses on them to do something like this for our fireplace mantel. Because if I had a tall skinny bookshelf it would be too full of schoolbooks to make the tree.

And I'd like to get a Skillbuilder Quilt Panel like the one that Angie at Timber Hill Threads just finished. I almost bought one last summer, but the shop only had one left and my mother got to it first.

Now that I'm actually doing more machine quilting, I think I could learn a lot from one of those. Or something like it. I know there's a sampler pattern in one of the quilting books I keep checking out from the library.

There's a great post over on Indietutes about doing it all at once, five minutes at a time. That's exactly how I need to be doing things this week.
Posted by Michelle at 9:51 AM

I entered the drawing too. Maybe we'll be two fo the 3 lucky ones...