Today was one of those days that you know well in advance is going to be a total mess. Two doctor's appointments, four hours apart and in two different cities, with four kids in tow. Under the best of circumstances, I dread the doctor's office. Too many bad things tend to happen there, especially when I'm not expecting them.

Because we were going to be out and about anyway, I checked Yardsale Treasure Map for fabric and yarn. I'm always intrigued by the ads that start "Estate of ---- " Is that a new thing, or just something they do down here? Is it advertised that way so that someone who's always envied her china or furniture can swoop in and buy it now that she's dead?

Edna G's estate was a treasure trove and they were trying to sell absolutely everything. I thought I'd seen it all, but today was the first time I've seen home canned peaches and other unidentifiable fruit priced for sale.

My first thought was "Who would be crazy enough to buy food preserved by a complete stranger at some unknown date?" But then I decided that it was soooo cheap and those peaches were so pretty I could see someone buying it to use as decoration on a kitchen shelf.

I bought myself a three dollar apron -- 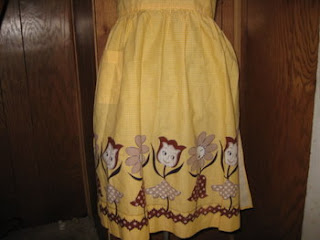 Who could leave those smiling flowers behind? And it's cut wide enough to actually fit me well!

I also found a fantastic overnight bag for a buck. 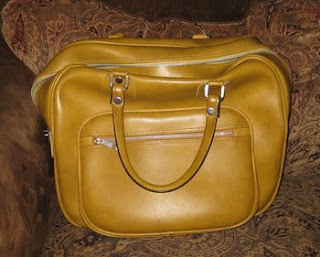 I've got a strong feeling that my father's mother had one just like it. Now I'm wondering if she actually did have one that I saw as a child, or it's just from her time period.

I also brought home some vintage sheets and slips for a dollar each and I'm sure I walked past quite a few other things that I should've picked up, but that house was soooo crowded with people who had no intention of letting anyone slip past them into other rooms.

I thought I'd done well, until Mom called to see if by any chance I was anywhere near Bend. Because Joann's is going out of business (they've got a new location across town) and all of their Keepsake Calico and quilting fabric was 90% off of already reduced prices.

I'm SO jealous! Not that I don't have fabric of my own, but sixty cents a yard for brand new fabric right off the bolt?! If I didn't have a husband to explain things to, we would've been in the car driving the hundred plus miles to see what was left.
Posted by Michelle at 6:16 PM