Christmas is four days away, I haven't wrapped a single thing, I haven't finished shopping, and I've got two quilts to bind before lunch on Christmas Eve.... the usual holiday season around here!

I did discover something encouraging when I was doing the first mad dash of my Christmas shopping. Fred Meyer (a chain grocery/department store) now has sock yarn and bamboo dpns. Since I started knitting and paying attention to that aisle, their selection hasn't changed much -- now they've got a lot of new yarns I didn't even know about.

There was a 20% off coupon, so I came home with a skein of Lion Brand Hometown USA and made a hat. 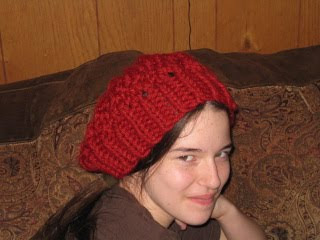 It would be Shroom from the new Knitty, but I didn't have enough yarn to make it long enough and wasn't patient enough to wait until I could drive 30 miles and buy a second skein just so I could do another dozen rows. I like the pattern and like the yarn (which I was trying because I might be tempted to buy enough skeins to do a bigger project) even if this little hat isn't quite what it should be.

Maybe Alex will lose it in the chicken coop.

After almost a year of not buying any yarn (not knitting made it very easy to avoid temptation), Grandma called and let me know about an estate sale one of her dealers was running.

I've never seen so much Red Heart Super Saver in one place that wasn't a store. I bought three huge bags of yarn, not counting the dozen skeins of fun fur that Alex snapped up for fifty cents each, and we barely made a dent.

Now I've got to figure out how to best use those single skeins that were too pretty and inexpensive to leave behind.

Among my purchaes were four skeins of Red Heart Strata, which can't quite be described as pretty and has an awful texture, but it's fun to play with. I searched Ravelry to see what others had done with it and found the pattern for Knit Dorm Socks.

They've been adopted by Alex, who doesn't seem to mind that they're a bit crunchy. 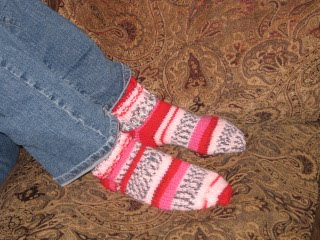