Friday, Bill drove me up to Woodland Woolworks to get a Japanese stitch book. I spent the whole trip up there giddily fantasizing about finally having it in my very own hands. They were out of the book I wanted. They were out of every Japanese stitch book they carry, so I couldn't even settle for a different one. So now I'm waiting for my first choice to be mailed to me, which will take a couple of weeks.

I could've called them to see if they had the book first, but I wanted to look at yarn. Bill was buying me Christmas goodies, and on top of that, I've got the money from the second digital camera to spend. I was all set to splurge and couldn't find a single skein that I wanted to take home, not even in the sale room.

I'm coming to the conclusion that I'm not an LYS shopper. Even if I go in with money in my hand, planning to buy yarn, I tend to leave empty-handed. So I'll stick with Knitpicks and Elann and the LYSs won't miss my business since I never shopped there much anyway.

I did pick up Knitting Lace Triangles by Evelyn Clark and rode home with the book open in my lap, planning to cast on for the Sand Dollar Shawl and deciding between two yarns already in my stash, and later I ordered a couple of other books I've been wanting from Amazon and put together an order form to replace the Denise cables I keep losing lately.

One of my first non-stash busting plans for 2009 is to make sure I've got enough thread and pins and darning needles and other important little things that I don't come to a screeching halt mid-project on the one morning I'm awake early and my kids aren't.

A friend came over to quilt with me this morning and while we were talking, I pieced blocks for my Sparkling Gems Quilt. I spent the first few days of the year finishing all of the corner units and cutting the 4 1/4" squares I still needed and now I've only got eight more blocks to piece -- I can handle that! 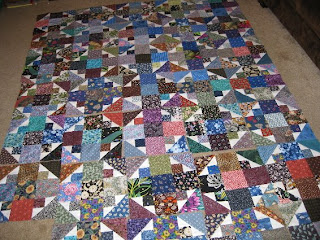 This thing is huge, and it'll be a bit huger once I get the pieced border done. I'm hoping that I can get the border done, since my sewing machine has been throwing fits all day. I've cleaned it. I've rethreaded it. The needle is new.

Guess the brat is just due for a tantrum.
Posted by Michelle at 4:21 PM

I LOVE scrap quilts and that is going to be a beauty - I'll be interested to see the pieced border!

I love this quilt...is there a post of the quilt finished?