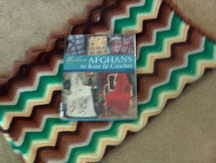 I've got this sudden crazy urge to knit afghans. I've actually had it since I started knitting a few years ago, but it's suddenly gotten stronger, fueled by the book I picked up at the library so I'd have something to look at during Alex's karate class. There are six patterns in here I can see myself starting. And then there's the Flying Geese Blanket and the Mitered Square Blanket and the Keepsake Baby Blanket from Mason Dixon Knitting. Not to mention the Log Cabin one I'm already working on. I'm fighting the urge to make a Wal Mart run for more acrylic.

I want afghans. Like the one in the top picture, which is crocheted, not knitted, but only a couple of family members would know the difference and that's because Great Grandma didn't knit. At least I don't think she did-- she did everything else, so maybe she did knit and we just don't have any surviving examples of her skill.

That afghan is scratchy. If I wasn't so sure it was acrylic, I'd swear that it was partially felted. But she didn't use wool as far as anyone knows. Can acrylic start to felt after 30some years? Did wool come in that nasty shade of green? 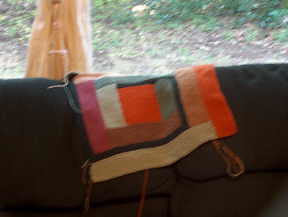 The log cabin is growing quickly. I'm knitting away, trying not to think about things like how easy it would be to whip one up in Softee Chunky as a baby gift. Because even though I've cheated like crazy on my yarn diet, I'm going to start being good and resisting temptation. Wish I'd bought a bunch of Denim Style when Wal Mart had it on clearance, because that stuff would make a wonderful squishy cuddly log cabin....
Posted by Michelle at 7:07 PM