{yarn along} I thought I was in trouble 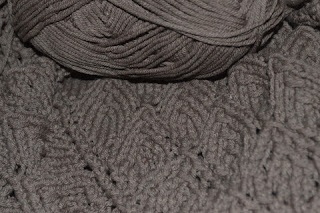 I set aside the Rose Ribbons shawl to work on socks for Judy's challenge and had an absolute blast knitting three pairs, one after the other. Until I hit the point where I couldn't even force myself to pick up the fourth pair and knit another row of that k2p2 ribbing.

I hadn't planned to put the shawl away  for so long. I hadn't written down the last row number and had a nagging fear that the magnet marking my spot had slipped. So between that and the sock, I haven't been doing any knitting. Until yesterday, when I decided it was time to pull it out and  compare the knitting to the chart and either knit a few rows or give up for good.

Sometimes the magnet has managed to remain on the right row and things are just as easy as they should be. It's a  good feeling.

I decided to read Yip/Tuck

because the plastic surgery element intrigued me. Turns out that, although the customer Melinda Langston finds dead on the bench in front of her upscale pet boutique is a plastic surgeon, plastic surgery is  a very small element of the book.  That doesn't matter,  though, because the book was so entertaining that I barely noticed. Aside from trying to find out who strangled Dr. O'Doggle with a leash purchased from her shop, Melinda also has her hands full trying to reclaim an heirloom brooch stolen from her by her cousin Caro (after she stole it from Caro herself.)
Even though I started with the fourth book in the series, it was easy enough to catch up on the  characters and their relationships. I wanted to find out more of Melinda's back story, so I picked up
Desperate Housedogs

, the first book in the series. That one is from Caro's point of view -- and I think I might like her better than her cousin.

My copy of Yip/Tuck was provided by the publisher.

Thanks for the book recommendations! I havent been reading much since I got back into sewing, but I'm putting those books on my 'to-read' list for whenever the mood strikes again!