another machine followed me home

It's been a long time since I participated in Show and Tell Friday, but this is too fun not to share. A couple of Sunday Stash Reports ago, I mentioned that I'd brought home another treadle sewing machine. Here she is! 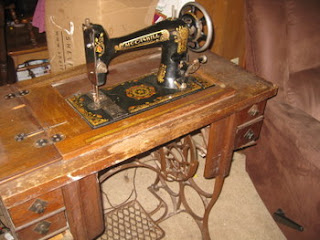 The cabinet is beyond rough and is missing a drawer, but it's got a mechanism that raises and lowers the machine when you open it up. And look at those decals! Yup, I decided to buy her for her pretty decals -- then I was told that she still sews.

Anyone know where I can get a replacement for the original belt that she still had on?

She's got her bobbins, and different feet, and an owner's manual so old and brittle I'm afraid to touch it because it might crumble to dust. 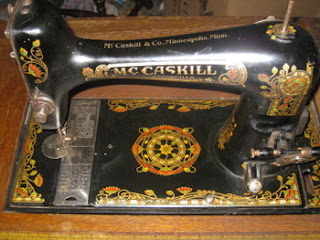 I love how the throat plate has a chart of which needles to use with which threads. The plate behind that has patent information and restrictions on its sale and use...would love to know what that means!

And I love the ruler painted along the wood in front of the machine. Wouldn't that be handy for quilting? 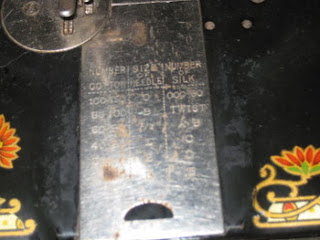 After carefully loading her into the van, my husband announced that my sewing machines now outnumber his trucks, which means I have too many of them. I insist that my daughter's three machines don't count -- they were all given directly to her and were never mine. We might be tied if we only count the parts rigs, but I think I get to count the two other trucks and the two boats...

I've only got six machines -- the Janome, my other treadle, Great Gradma's vintage machine, my featherweight, and the paperweight. That's not too many, is it?
Posted by Michelle at 11:06 AM

No, it's not too many - because I have a treadle, a 1903 Singer, a Singer Featherweight, a Singer 7470, a Singer Scholastic, a Juki, and a serger! And I'd have more, but I gave one away to a friend!! Your treadle is lovely - you should be able to get a replacement belt either online or from your local repair shop. Good luck!!

I've had two treadles follow me home, and a machine that DD gave me thinking it was just a cabinet she found at a yard sale, and a couple of ones from when I was quilting with the kids at school that the other teacher sent home with me because they weren't her preferred brand, and my Bernie and my Janome. That's only seven. I think my old machine is still in a closet--that would make eight.