I do know where some of my stuff is! Despite my fears that I (or my sometimes over helpful teenager) might've moved it, that Bento Box backing was still exactly where I left it when I brought it home from Joann's last summer. Under a lot of other things that had been deposited in the sewing room since then, but at least I knew exactly where to look.

Now I've just got to find the 30s top and my copy of Scrap Basket Surprises. And I have no clue where either of those has gotten to. 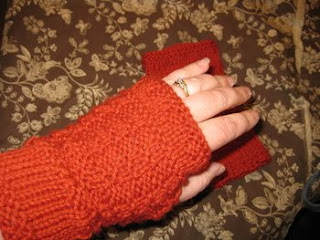 For the past couple of months, I've been curling up in my corner of the couch and knitting baby hats. I started with some partial skeins from my own stash and a bag of partial skeins I picked up at the thrift store for seventy five cents and I've kept at it until most of the softest fuzziest stuff is gone.

Somewhere along the line it occurred to me that instead of whipping through two or three hats an evening, I should maybe work up a gauge swatch and cast on something just slightly more ambitious. So I brought a skein of pretty yarn in from the sewing room and started looking for a pattern.

There aren't a lot of choices for 95 yards of hand wash only worsted weight cotton/wool blend. I don't have an Ipod that needs a cozy, don't drink coffee from a cup that would need a cozy, and I don't want a cozy for my camera.... So I wound up making a pair of Easy Waffle Stitch Fingerless Gloves. I left out a couple of stockinette rows and only had about eighteen inches of yarn left when I finished the pair.

Please excuse the less than wonderful picture -- it's hard to get a good shot of your own hand!
Posted by Michelle at 12:58 PM