and diet Coke is on sale at WalMart! 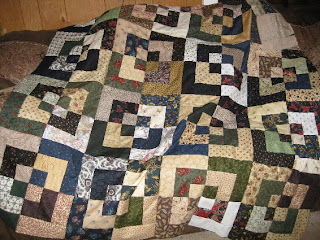 Our phone rang very early this morning -- early enough that when it woke me up, I thought it was still night and someone in the family must be dead or maimed. Maybe some people might want to consider that making last minute car pooling plans at 4:44am isn't the best phone etiquette? I had planned on getting up early, but not quite THAT early.

I did get myself motivated enough to finally assemble the Bento Box top. And I finished piecing the blocks for Simple Pleasures, so if my luck or motivation or whatever holds out, I hope to get that one assembled tomorrow morning before the kids are out of bed.

Bill is back at work after two weeks of vacation and when it's just the kids and me at home, I can chase them out of the front room to lay out blocks and pin rows and do all of that other less-than-fun stuff that you have to slog through if you're ever going to finish a quilt.

This stretch of vacation was very low key -- we rattled around the house and made a few day trips. Yesterday's was to take the kids to the fish hatchery near Sisters. I could never get quite the camera angles I wanted, but it was so cute watching Leif toss in a couple of little pellets of fish food at a time and then jump and clap his hands every time the fish went after them. 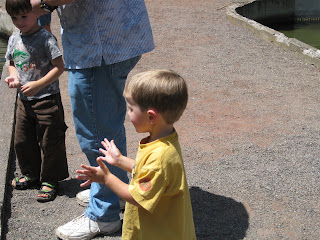 The diet Coke? I really needed the caffeine today and it was on sale cheaper than I've seen it in ages. Now there's enough in my kitchen to last quite a while. I'm happy.
Posted by Michelle at 6:14 PM