The bead store didn't have lucite rings. I'm not convinced that the lady there even listened to my question, because she steered me toward jump rings and said that was the only thing they had. So I went to the craft store and found some little metal rings that I hoped would do the same job. Then I went home and got to work felting the bag and dying it with Black Cherry Kool Aid. 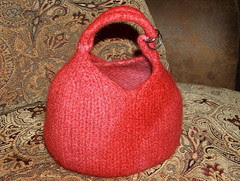 I love this little bag! It's the perfect size for my wallet, phone, and keys, and doesn't gape completely open to spill everything out. Keep in mind that I've been carrying diapers for most of the past 11 years and cute little purses are a totally unrealistic fantasy at this point in my life. But I do plan to knit another one as soon as I figure out what yarn to use.

StandsWSicks has one on Ravelry that's done in Knit One Crochet Too Paint Box. I've got some single balls of that in my stash...maybe I could stripe them?

And llamalady has made a "double dumpling" that's more of a shoulder bag. That would even hold diapers! 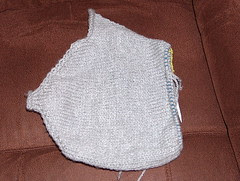 This shark hat has been driving me nuts. There's an error at the very beginning of the patter nthat brought me to a screeching halt about five minutes after casting on. I got that figured out, but once I got about halfway through the dorsal fin my shark's tail didn't look right so I ripped out the whole thing and started over. This time, I got almost to the teeth before deciding that the body is still too short and fat. He needs more plain rows between the tail increases and before the dorsal fin and between the last fin decreases and the ribbing...knitting this pattern as written definitely won't give you a shark shaped like the one in the pattern pictures.

I looked at the other shark hats on Ravelry -- should've done that before casting on! It's not just me. All of the shark hats there have modifications.

So do I start over a third time, or do I just move on to the teeth? Because I'm not sure how that part is going to work out, either.
Posted by Michelle at 6:10 PM