I Want This Quilt! 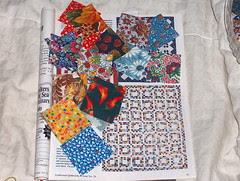 This is the quilt I'm suddenly so motivated to work on -- Scrappy Squares by Carol Clark, pattern in Traditional Quiltworks #70. I've had the magazine turned open to the black and white pattern page for so long I almost forgot what the finished quilt was supposed to look like. I've been focusing on the part where I cut tons and tons of little squares and eventually join them into units. I was picking up yesterday and turned to the picture and it hit me again that I really want to have this quilt.

If I actually follow the pattern as written, it'll be big enough to cover my bed. Which got me worrying. Maybe I should be sticking to some kind of color scheme. Maybe I should be making the shaded nine-patch quilt bigger. Maybe putting on those pieced borders will be too much for me.

Maybe I should stop worrying and go cut more squares.
Posted by Michelle at 8:45 PM

i second the 'stop worrying.' : ) worrying about the outcome too much makes the project less fun, i think... i certainly do it anyway, though! good luck with the quilt!