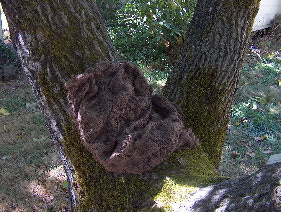 I pulled out the Hemlock Ring Blanket last night and sat up with it for a little while, knitting just a few rounds. It's almost time to start binding off, but I made myself go to bed at eleven. There's no such thing as staying up just long enough to finish that last round and bind off a few stitches. It either would have been so much fun I'd have sat up and done the whole thing, or so miserable I'd have spent hours lying awake and dreading the rest of it.

So I went to bed and tossed and turned and thought about yarn and patterns and how I want to cast on for a new pair of socks from the Socken-Kreativ-Liste that both intrigues and terrifies me, and debated whether or not I want to use that chenille to make that toddler jacket now that I've confirmed it's possible and found a girl toddler who happens to be the right size and who I really should knit something for, and worried about the wooden needles with the blunt tips that I suddenly need but might've gotten rid of...

So I didn't get up before the kids and start binding off the blanket this morning like I'd hoped to. 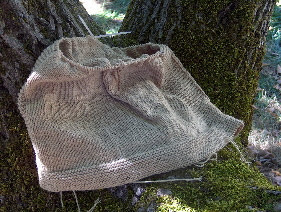 The Cobblestone Pullover has been a happy knit so far, a good project to pick up and work on while I've got to keep my attention on other things. I've got about four more inches of mindless knitting before it'll be time to do some math and start the sleeves.

I'm sizing it down for Heath by kntting at a tighter gauge. Hopefully that means I can knit the yoke part as written and have it turn out okay. If not, I'll figure out how to fix the problems as they crop up. How bad can it get?

The Sierra Pacific Accord has been a bit of a mystery yarn. I've only found a couple of mentions of it online -- both of those knitters absolutely hated it. I don't think it's that horrible. It's cheap acrylic, along the lines of Red Heart Super Saver, but even cheaper. I bought a bunch on sale for $1 a skein last Christmas.

I did actually knit and wash a swatch, and it seemed to come out just the same as it went in. Okay, it was a baby hat, but that's as close to knitting and washing a swatch as I'm likely to get.
Posted by Michelle at 12:24 PM