I have been Alisoned. There was a padded envelope in my mailbox yesterday, with an alpaca scarf in it. I had it out of the envelope and around my neck before I even got a glimpse of the stitch pattern, and it kept me going for the rest of the day. I don't even know how to start to describe how good that scarf is still making me feel. I've suddenly got a security blanket. Which is good, because I'm starting to get scared.

I had my fingers buried in the edge of it while I took the phone call from the nurse who told me they'd found some abnormalities in Leif's bloodwork and I'd have to wait for the letter from the doctor to find out what they were. If I hadn't have been driving, I might've been able to demand more details, but I don't talk and drive and was honestly too horrfied to come up with any decent questions. I don't even know what they were testing for, except lead. He doesn't have any of that.

The littlest ones settled down early tonight, so I've had more time than usual to play.

I used to love sewing, but haven't done much of it in recent years. My old sewing machine was stuck where I couldn't get at it and now that I've got a fancy new machine, I'm scared to death of it. We aren't the best of friends, not yet at least. Something went badly wrong with it before the holidays and I had to take it in for a checkup. It's been back since shortly before Christmas, but I didn't have the time or nerve to play with it before today. I only plugged it in today because the warranty period on the repairs (that wasn't really a repair because they couldn't find anything wrong) is running out fast. 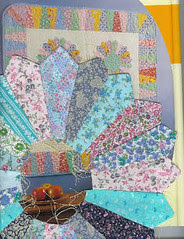 Alex and I got a bag of fabric scraps for Christmas and I'd pulled together a bunch of colors that I thought would work for this little Dresden Plate quilt. I thought I'd cut and stitch a few of the 80 little wedges, but I wound up making all four of the plates and only stopped then because the muslin I need for the background is out in the sewing room and I've already braved the dark and cold once tonight.

I'm loving this project. I got sick of using the rotary cutter to do such little strips and decided to trace around my little cardboard template with a ball point pen instead. Some of the fabric I used (most of it, probably) isn't the greatest quality, but I'm trying to make a car seat quilt, not an heirloom. Mostly what I'm doing is playing around and enjoying myself.
Posted by Michelle at 11:33 PM

And here I was wanting to apologize that there wasn't a second skein when I wanted one, it wasn't as long as it should have been, I had no chance of getting a back-up skein this many months after buying the originals...

...But I just kept thinking, but it's soft and warm and and and. I'd started it before you told me what colors you liked, and then when you said that color and there it already was already ready, it just felt like it was meant to be, short or long or whatever. Sometimes life doesn't let things come out quite the way we envision them, but sometimes we find it's okay just the same.

Hugs to you and your Leif, and I hope it all comes out okay on the far more important things too!

Waiting for test results is so difficult - I hope that all is well.

Your dresden plate quilt is going to be wonderful....I need to clear out a path to my sewing machine...I have a nice scrappy quilt just waiting to be quilted and bound.

What a gorgeous quilt! That's a great idea to make a carseat quilt. Something durable, colorful, and warm.

I sincerely hope Lief is feeling better soon, and that it's nothing serious. I'll be praying for you! Please update us, if you don't mind!