So long ago I can't remember when it was, I read a post on Socknitters that explained how to start a sock from the toe up and gave it a try. Everything was going wonderfully until it was time to start the heel and I realized that I didn't have the slightest idea what to do next. I tried something, which didn't work, then put the whole mess onto waste yarn and hid it from myself. It popped out of hiding now and then, but even though I'd figured out how to do a short row heel, I guess I thought that frogging back my miserable attempt at a heel and picking up the stitches would be to hard. Actually, I'm not sure what I was thinking, because once I finally picked it up again it took two evenings to finish the first sock and would've only taken a couple of days to knit the second one if I hadn't been doing everything but knitting. 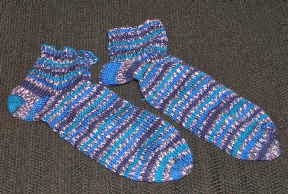 It's easy to avoid knitting projects, even the ones I want to do. I let myself get scared by people who posted that there wasn't enough yardage in a skein of Magic Stripes to knit a pair of size 10 socks....I couldn't divide the yarn evenly in half because I don't have an accurate scale (that's near the top of my list of things to buy after the house sells)...I was afraid of messing up my "good" yarn (even though in this case, the good stuff had been bought with a 40% off coupon and would be easy to frog or replace if something went disastrously wrong) ....

Because I was sure there wouldn't be enough yarn, I made them short. A lot shorter than they needed to be, but they fit and I like them and I'm going to try making a tiny hat of pair of socks for #4 with the yarn that's left over. 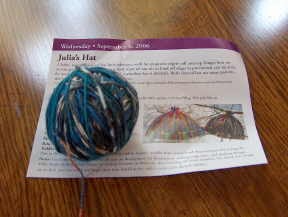 I tried last night, but wasn't paying enough attention to the instructions so I'll be starting over this afternoon.
Posted by Michelle at 12:57 PM